You may never hear from me again. Kelly has shown me Pinterest.
Lord, have mercy.
In other news, Kelly is going on the Women's retreat with me this weekend! I can't wait to spend an entire weekend with my girl!
Posted by Mrs at 8:13 AM 1 comment:

A New Level of Depravity

I guess I shouldn't be surprised.
Scriptures tell us not to expect those in darkness to act like those who are in the light. Still, when I come across something that should be obvious to all that it's not a good idea, it still shocks me a little.
There's an entirely new category of books at the book store titled, "Teen Paranormal Romance." I'd like to say it's a wee section with a few books, but it's pretty large. Thank goodness Glenna rolled her eyes when she saw it.
Speaking of Glenna, she's required to read Edgar Allen Poe for her Literature class. This is the first time she's read about things like murder and ghosts and supernatural happenings, other than in the Bible. ;-) She absolutely loves his writing style, and who can blame her? Still, the sooner we move out of that mind, the better!
Ah, homeschooling. Gone are the days of The Little House books! We can only read the Narnia series so many times, too. I'm so thankful that she loves to talk about the things she's reading so we can dialogue.
Peeking out from under the rock a little today.
Posted by Mrs at 7:14 AM 2 comments:

I love secrets.
When I was younger, not so very long ago, I couldn't wait to find someone to share a secret with! I couldn't wait to see their eyes light up, hear them gasp in disbelief, or just REACT. I would of course swear THEM to secrecy before I told them everything, but I did, indeed, tell them everything.
Then I found out that Gossip is a cruel mistress.
Years ago, I kicked her to the curb.
Now, I have been trusted with sweet secrets that will be revealed in their good time. Instead of storming my brain for someone to tell, God has done an amazing work in me. Himself was astounded and would say, "You KNEW? Wow! You didn't even tell ME!"
I can't wait for the secret to be revealed by the Secret Holder. I can't wait to see people's eyes light up, hear their gasps of disbelief/delight, and watch them just REACT. I am already in the know, and it is enough to love and pray for the Secret Holder. It's a delight to realize that this is not my tale to tell. It is my joy to be given the small, bit part, or the walk-on role that barely shows up in the credits.
It's such an honor to KNOW; there's no need to TELL.
I love secrets, but I love the Secret Holders more.
Posted by Mrs at 8:29 AM 4 comments:

For quite a few days, my dining room table looked like this: 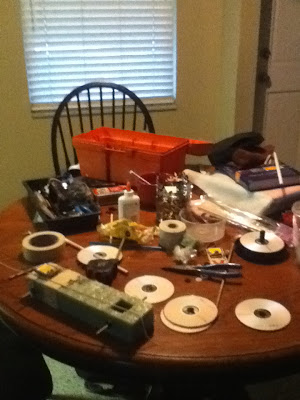 Plastic tubes and pots and pans, bits and pieces and the magic from my hands will make . . .weird science. . ..
Glenna's assignment from her physics class was to build a mousetrap car. 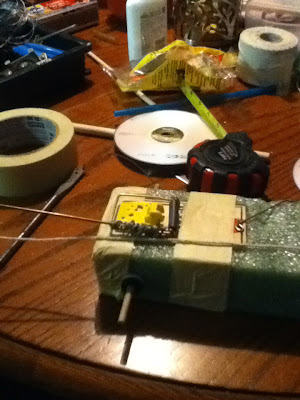 The car had to function through Newton's 3rd Law: Every action has an equal and opposite reaction.
Boy was I thankful that Himself wasn't out of town this week. 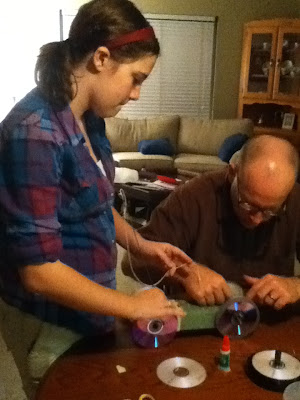 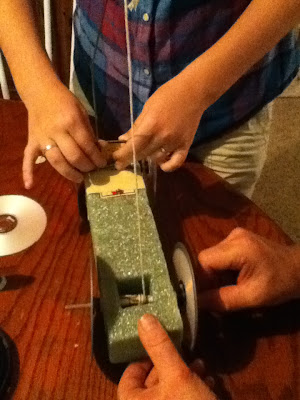 Mousetrap, styrofoam, string, dowels, washers, CDs, string, and balloons stretched around the CDs for traction.
The end result was a fantastic car that while not aesthetically pleasing, it worked! 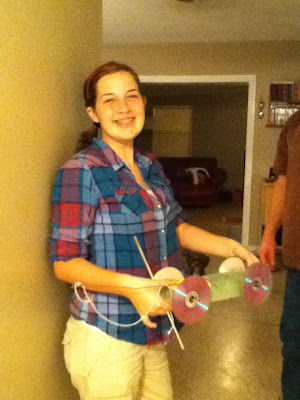 Here's a video of the initial test run. Note that I forgot I was filming with my little iPod, and then Missy had to check it out in the end.
The hard work paid off! She was one of only two who scored 100% on their cars! Her teacher asked if she could take the car to show the class at the other campus.
Way to go Glenna!!!
Posted by Mrs at 5:13 AM 3 comments:

The Result of The Reward

Yesterday, I posted the beautiful sunrise that I enjoyed because I get up so early for work.
The downfall, of course, is that I'm very, very tired by the end of the day. I get excited when it's 8 0'clock not because there's some prime time television that I've looked forward to viewing, but because I know that bedtime is that. Much. Closer.
Most days, I crash around mid-afternoon and have to take a nap. I'm about ready to give up this habit, though, but mainly when Himself is in town.
Like Pavlov's dog trained to salivate when a bell is rung, I believe Himself has been wired to open and shut our carport door 40 bazillion times the second I fall asleep for a nap. This wouldn't be so bad and I would probably continue sleeping if it weren't for one detail:
The Alarm.
Since our break-in last year, we have had an alarm system installed. It gives me some degree of peace when I'm at work and Glenna is home, knowing she has a panic button that will bring help immediately.
The Alarm system also alerts us each time any door is opened. In a cheerful, slightly British voice it announces, "Back Door" or "Front Door," and then loudly beeps. Twice.
"Back Door." Beep Beep!
"Front Door." Beep beep!
So, this it what it looks like when you're up early enough to see the sunrise and your husband continually wakes you from any attempted nap: 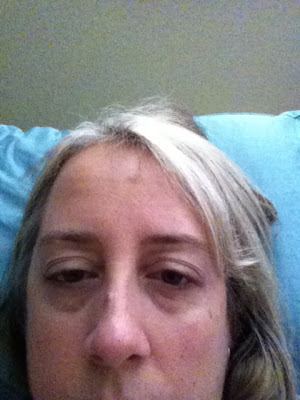 This is how the Lord rewarded me for getting up so early for work: 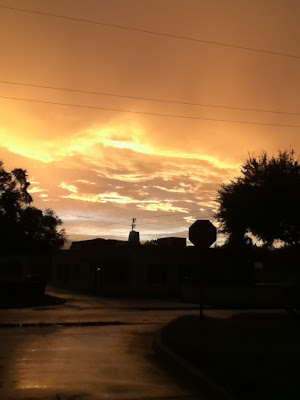 Ty had us over for dinner last night.
We brought the dinner. =D
Unfortunately, his Brown-Eyed Girl was neck deep in piano performances this week and she was unable to join us. (Miss you!)
It was a nice, relaxing evening in a nice, uncluttered apartment. My Mama-Heart loved listening to brother and sister banter back and forth, or discuss physics and Newton's 3rd Law.
What I wish I had photographed, however, were the patches on Ty's counter (that he says he probably won't put on his uniforms any time soon), or the name plate for his tool box, or the certificate that came with both of those items. What's important are the two words on all three:
MASTER TECHNICIAN
I wonder if he's the youngest at his shop to ever get Master status for Mack? We joked that he should sew the patches on his T-shirts instead, or use them for coasters to impress guests.
He's almost finished getting his degree, and his ASE and Volvo Master certifications are right around the corner.
Go.
Ty!
Posted by Mrs at 6:19 AM 3 comments:

This time, it's different.
When Kelly went off to college last year, I was comforted with the fact that she was only two hours away (compared to her brother being in Tennessee). I was able to take her, help set up her room, do last minute shopping needs, then cry briefly on the way home. It was comforting to have her brother finish school a few weeks later and then move back home.
This year, the house is so, so empty. Glenna has the entire upstairs to herself now that Ty's out on his own. I didn't get to take Kelly and move her back into her dorm. It was rough, to say the least.
On Friday, Himself threw my bags into the car and said, "Go." He set up a hotel room for me and Kelly in her college town and we spent a wonderful weekend together! I was only able to stay one night, but at last I got to see the details of her dorm, smooth the duvet cover, and buy a rug that was just right. We went to dinner and a movie, then watched TV all night.
It was perfect.
Thank you, Darlin'. It was exactly what I needed.
Posted by Mrs at 6:13 AM 1 comment:

Gone are the shelves and bins overflowing: 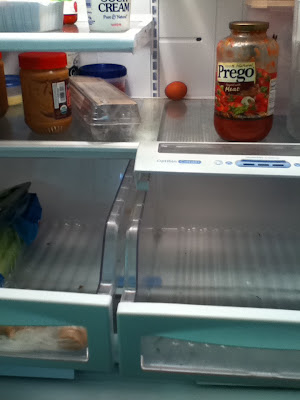 Empty are the drawers. A lone egg wobbles to the back of the fridge.

Crisp apples once filled the emptiness of our bellies: 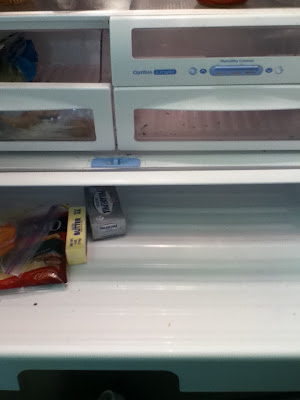 What, exactly, could I make with cheese, a stick of butter, and cream cheese?

Man, do I need to go to the store. I have had meetings every day after work, and tonight I am starting a MOST EXCITING language class (one that I've wanted to take forever!). I can't wait!

I stopped at the health food store on the way home and picked up a few things. There were halleluias, I'm pretty sure. I seriously need to do some meal and grocery research! We've got to stick to a budget so we can pay for college and continue paying down our debt.

So, anyone care to share how to healthfully feed three people on $20 per day?
Posted by Mrs at 6:10 AM 1 comment:

Add Snippets to your site